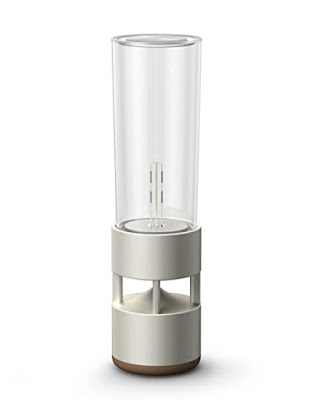 This speaker, officially the LSPX-S1 Glass Sound, has a very candle-like apperance thanks to the glass flute and the LED lights that gleam as much like a refracted candle flame as they can. Sony specifically mentions that the glass was designed to resonate with frequencies produced from the driver and expand the speaker’s sound capablities, particularly when it comes to the human voice.
As far is it goes, Sony has hit all the décor buttons with expert fashion – it really does look excellent, and nothing like a Bluetooth speaker except for a few ports hidden in the back of the base. The idea is to buy two of them, display them on your table, and link them both to your phone over Bluetooth to play whatever music you prefer. There are secret controls on the bottom of the candle to change volume or the brightness of the LED lights. Each base has a battery life that lasts for around four hours before it needs to be recharged.
Now, Sony assures us all that there’s a 50mm woofer for reproducing low and mid-range sounds expertly. However, the reports surfacing indicate that the speakers do struggle to replicate bass sounds, but excel at the high range – in other words, they’re more suitable for violin music, as befits their appearance, and less for hip-hop.
Oh, in case you haven’t picked up on it yet, these Bluetooth speakers are very high-end. They will be selling in mid-2016 at MoMA Design Store for $800 a piece. Could that price be more ridiculous? We had to double-check to make sure the speakers weren’t gold-plated. Yes, they look like candles, but they also have poor bass reproduction and battery that won’t even last all evening. If Sony is aiming for premium branding here, we’re not convinced until that price drops by about 80%.
Don't compare the other sound technology with Sony.
Just a king. 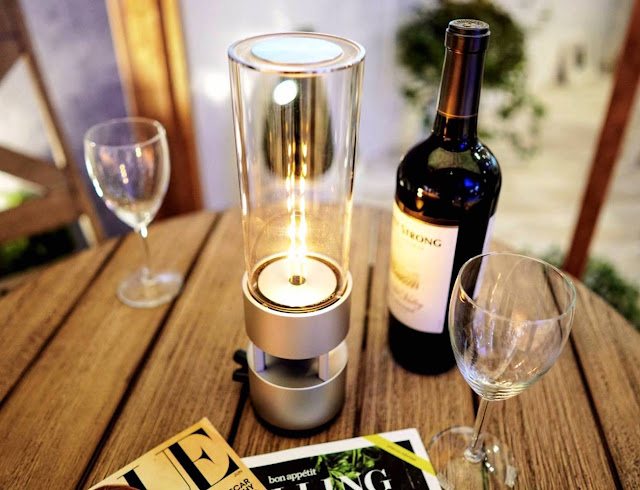 Measuring approximately 12 inches tall and 3.3 inches around, the Glass Sound Speaker looks absolutely nothing like a speaker. The translucent organic glass cylinder that houses the LED is actually a unique glass tweeter, projecting sound in all directions simultaneously. A downward-firing 50mm woofer is situated beneath the cylinder and a passive radiator is located on top. In other words, the sonic components are cleverly blended into the design—you can easily miss them altogether at first glance. Beneath the glass, a metallic base houses the internal electronics, and the bottom panel is made of leather, with a rubber center that keeps the speaker from moving around during heavy bass vibrations.
In a head-scratching design move, the controls for the speaker are located on the bottom panel. That means you have to lift it to adjust the brightness of the light, the volume (volume controls work independently of your device's master volume), or to pair using NFC. You can turn the LED off by tapping the power button briefly (it requires a press and hold to turn the whole system on or off), but every other function is controlled on the hidden bottom panel. This makes for an uncluttered design from a cosmetic perspective, but we live in an age of capacitive touch controls that are easily hidden from the eye, and lifting the speaker to turn down the volume or lights takes away from its otherwise graceful feel.

There's a timer function. Pressing the Timer button on the bottom panel will shut the speaker and lamp off after 60 minutes. Pressing this button again will cancel the timer, and pressing and holding the button will put the speaker in pairing mode. Audio cues for each function let you know when you've set the timer, cancelled it, or entered pairing mode.
The speaker works with the free Sony SongPal app, which includes playback functions and the ability to control different Sony wireless speakers by zones (you can pair multiple Glass Sound Speakers to the same source). You can also adjust the brightness of the light and program the sleep timer via the app. However, the app isn't essential to the operation of the speaker.
The controls on the speaker itself are quite limited. There is no way to control playback or track navigation, another strange oversight, nor is there a speakerphone function. Playing and selecting music must be done on your device itself—something that isn't true of the majority of speakers that cost $700 less than this one.

Sony estimates the Glass Sound Speaker's battery life to be roughly four hours, but your results will vary depending in your volume sleeves and whether you are playing music wireless or using the wired input, among other factors. Other than a cleaning cloth, the speaker doesn't ship with any accessories.